How much is glory and fame really worth, when counted in the suffering of the people closest to you? The death of the housekeeper of the fictive world-famous Nobel Prize laureate Axel Ragnerfeldt becomes the starting point of an investigation into the claustrophobic family ties, mysterious disappearances and dark secrets surrounding a man shrouded in myth.

With her fifth novel Shadow, Karin Alvtegen has achieved her darkest and most complex thriller to date, in which the disturbing truth of a sick family is gradually and mercilessly laid bare.

Winner of the Danish Academy of Crime Writers´The Palle Rosenkrantz Award 2008 for Best Crime Novel in Denmark of the year.

Nominated for the Swedish Academy of Crime Writers’ Award 2007 for Best Swedish Crime Novel of the Year.

Fantastic!
Karin Alvteen is one of my favorite authors and she is really a good storyteller. Her prose sucks me into a world of literature, intrigue, marital sadness and betrayal. It is a very exciting novel, but calling Shadow only for a crime novel is not enough. Karin Alvteen lifts the genre to a level that very few reach. The interiors of the two Ragnerfeldt families are among the best I’ve read in a long time. There are a couple of eerie depictions of marriage in disrepair that really undermine Karin Alvegen’s great skill as a writer.
A fantastic novel!

Shadow is a masterful novel, worthy of the author’s relationship with Astrid Lindgren.

Responsive depiction of the price of immortality.
Alvtegen slowly but surely dismantles this family’s small and big secrets. And what is revealed is not beautiful. As in her earlier novels, Alvteen shows that she is a skilled storyteller who can both chisel out a saturated tension and responsibly record the darkest shifts of emotional life.

Dear readers, if you only read one crime novel a year, then Shadow should be on your wish list, be under your Christmas tree or reserved at your local library. Amen.

Alvtegen really writes about how mistakes and wrongdoings are passed on, how they always cross the generational boundary. You inherit not only eye color and talent, but also cowardice, selfishness and lack of decency. The consequences of the parents’ mistakes are the children’s to bear. What is buried, silenced and lied to always goes on in the day.

This is a real page flip that you will not release until it is read.

Karin Alvtegen is a skilled storyteller, with a strong sense of language and nuances. She crawls inside the skin of her novel characters and portrays them in a credible way. At the bottom of Shadow is a strong morality and the question of what we do with our lives.

Karin Alvtegen has grown up in the genre called psychological thriller. She has already been translated into no less than 25 languages ​​and the previous book, Skam, has been nominated for Duncan Lawrie International Dagger, a prestigious award in the crime book genre. Shadow is hardly a traditional thriller. But a good book, exciting and intelligent with an excellent language.

… Around these people, Karin Alvteen tells a dark, vivid story of betrayal, murder and Jesuit morality with a linguistic intelligence that ranks high above most of her more lucrative than powerful writing thriller colleagues.

Who bears the heaviest blame: The one who hurts or the one who sees it happening without intervening? These are important questions Karin Alvteen asks in this dense, exciting and well-written suspense novel, where the story carries the feature of the movie “Dangerous Connection” with Glenn Close.

As always, it’s hard to release Alvtegen’s psychologically gas-hugging books. Shadow tickles nerves from start to finish. The end is fascinating and provocative. Shadow leaves a shadow in the consciousness. 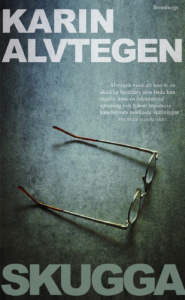 What inspired you to write Shadow?

When does the first seed fall, and when does it start growing to then slowly branch out? Afterwards, it’s difficult to remember how it all began. How the characters matured in one’s mind to then come to life and correct themselves during the actual writing process. I remember two seeds from the other side of Shadow. The first one fell when I discovered I had been written into the Swedish national encyclopedia. Proud and happy, I scanned the entry.

Alvtegen, Karin, b. 1965, author, great niece of Astrid Lindgren. A. made her novel debut in 1998 with Guilt. With Missing (2000), which was awarded the Nordic Crime Writing Award The Glass Key, she established herself as one of the country’s foremost new crime writers, a position that she cemented with Betrayal (2003). A. writes intensely suspenseful psychological crime novels with terse character portraits, especially of women. Despite receiving massive attention in Sweden, she has attained her greatest successes outside the country; the books are translated into more than 20 languages. A. has also written screenplays for the TV series “Rederiet” among other productions.

One of the lines got me thinking. “…with terse character portraits, especially of women.” I immediately knew that the next novel would have men as the main characters, since the very driving force of my writing is to up the stakes, try to grow and above all, to challenge myself. Would I be able to create equally terse portraits of men? My fundamental way of viewing things has always been that if you scrape off the social and cultural heritage, I believe men and women deep down inside harbor the same driving forces and fears. I wanted to set out exploring this right away.

The other seed came from an entirely different direction. I have in my family one of the most admired and adored people ever in Sweden. My great aunt Astrid Lindgren. Astrid was a unique author, but also a unique person. She is and remains to me a great human role model. Those of us who had the privilege to know her, know that she is every bit as fantastic as rumor has it. The thought suddenly struck me, that what if it was precisely the other way around? What if a celebrated national icon, a Nobel laureate of literature whose novels were filled with thoughts on good and evil, was actually a real wretch? A man whose family was still forced to maintain the revered lifetime achievement and keep the aura of irreproachability intact?

From these two seeds, the idea for Shadow emerged and was mixed with other thoughts and concerns. Why do we humans have such a longing for numbing the brain with alcohol and other drugs? Which impact does the current media climate have on our children? What marks the outcome of our lives, and just how deeply are the traces from childhood etched into our minds? Who is really to blame when it all goes wrong? Is trying to save the world worth it if it is at the expense of one’s own family? And if so, what is the driving force?

The characters and the plot took shape during a year, after which it was time to start writing. One question was constantly present during the writing process: What is, in truth, genuine success?